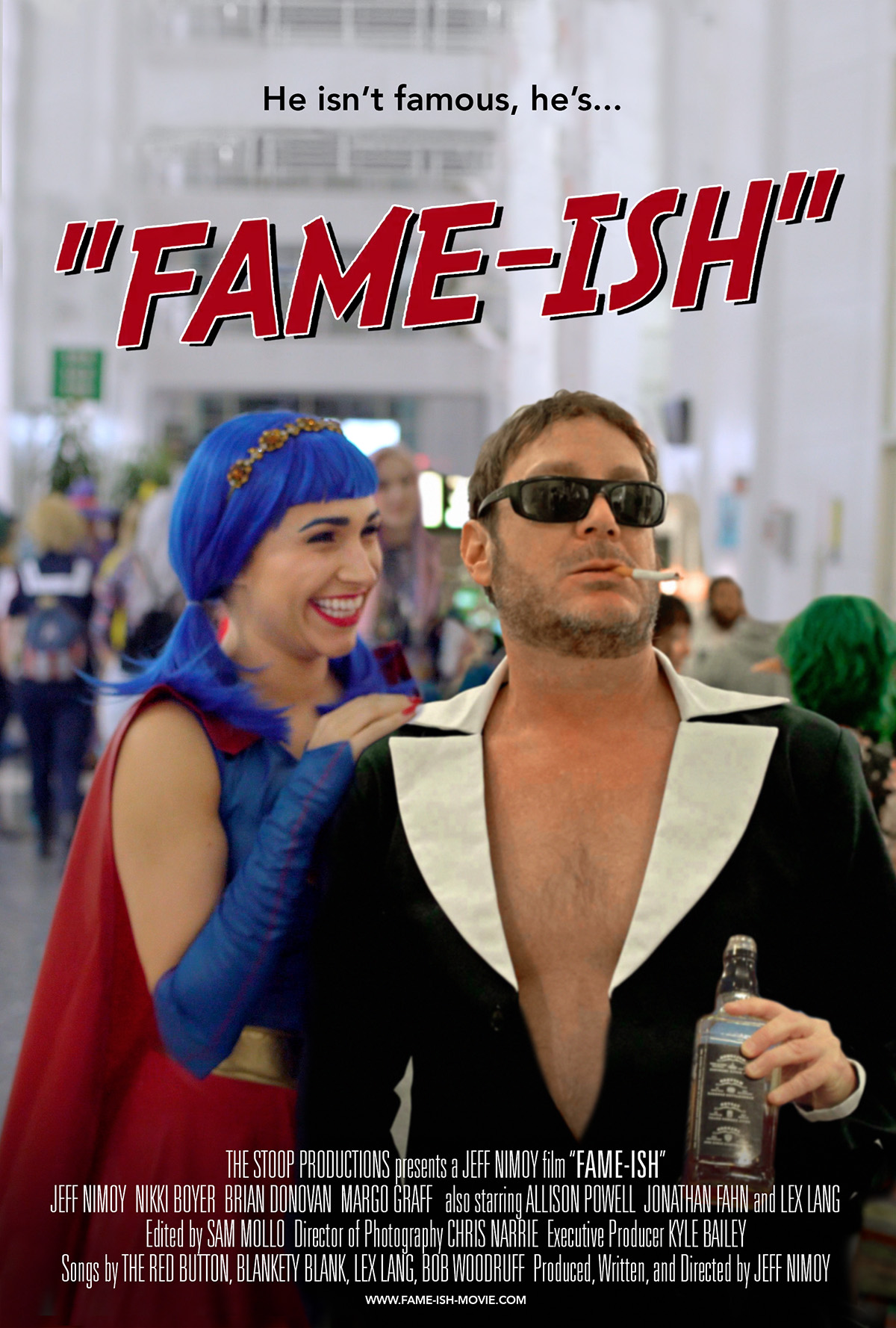 It’s rare that I do a review on a live-action movie but given the huge anime influence in Fame-ish, I thought it would be a fun thing to write about.  Fame-ish is a movie starring, directed, and written by Jeff Nimoy who is known for his work on Trigun and Digimon and co-stars other famous voice actors such as Lex Lang, Johnathan Fahn, and Brian Donovan and actress Nikki Boyer.

Jeff plays a character version of himself who has fallen into a slump with his career.  Needing money he agrees to be a guest at a convention where a lot of madness happens. The story is a romantic comedy so as the genre suggests you have a lot of romance with a lot of jokes and humor intertwined with the plot.  One thing I really like about this movie is the jokes are honestly funny.  You find a lot of romance movies when they try to incorporate jokes the humorous mood feels forced into the story and you can almost feel the disconnect right away.  That’s not the case with Fame-ish, the humor really helps set the mood and the movie does a great job at transitioning the overall tone when the story goes from playful to a more serious part of the plot. There is one moment in the movie where Lex Lang references his role as Wargreymon and it had me rolling in laughter. I actually went back to watch that part again.

One of the biggest perks of the movie is it really knows its target audience.  Not just who would likely watch the movie but also the general knowledge shared by the target audience.  The movie doesn’t bother to explain why Jeff is iffy about shaking hands and hugging fans nor does it take the time to explain to the viewers what a convention is and what goes on at these events.  Instead, the movie just shows you what is going on and expects you to pick up on the details as they are happening. The movie is clearly aimed for convention-goers so it plays on the fact that the viewers already have a decent amount of knowledge about this stuff.

The story follows a very traditional romantic comedy (yes I do know my stuff on this subject because I pay attention to the movies I watch with my wife) in a far from traditional setting for the genre. Almost the entire movie takes place at a convention and the plot has Jeff heavily involved in a love quadrangle which spirals out of control.  How his bonds form and break and reform with these characters really feels well-executed and organic.  Jeff, in this movie, is a pretty bad person and I felt no sympathy for him receiving the backlash for his actions, but then he has a moment where he understands his actions and actually makes an effort to improve himself and his relationships.  It felt so well executed that I went from disliking the character to rooting for him to do better.  It also captures the convention scene perfectly.  Not just the fans that can socialize well with the voice actors but also the awkward ones that are nervous and don’t always know what to say.

I honestly thought that the convention scene would serve mostly as a location for the movie and the humor that comes with conventions such as con crud (people who should shower more during these events).  Then Jeff has that moment in the movie where he goes from being completely broken to taking steps to resolve all his problems.  There is a beautiful moment, which I won’t describe in detail, between Jeff and a fan that I was genuinely moved by.  It showed just how much the voice acting/directing community has a positive effect on us the fans.  In my opinion, it also sends a very clear message.  Speaking about myself I have met dozens of voice actors and I remember every single encounter in clear detail because of how much they meant to me.  I do not expect them to have any idea who I am, not out of any negative reason just simply due to the fact that I’m one of the hundreds of people they will see during a weekend.  When I saw this scene I felt like it was a way for them to tell the fans that we do in fact know that we mean a lot to you and we are honored to have played such a part in your lives.  It sounds cheesy I know but that’s how I felt watching it and I just loved every bit of it.

Overall I am typically not a fan of romantic comedies because I feel the genre forces humor that is poorly executed and forces character development when there doesn’t appear to be any reason why the character would make such a drastic change.  These are issues that are non-existent in Fame-ish.  The movie is geared towards those that are familiar with anime conventions and does not lead you by the hand to explain some of the things commonly found at these events. For that reason, I think a lot of the humor would be lost to those who have never attended one of these events, but the movie is ideal for those who have and you should absolutely watch it. I have this movie rented for 48 hours so I think I’ll go watch it again.