I love all things Gundam.  I mean I am a huge Gundam fan so of course I know about Mobile Fighter G Gundam.  This series really twists the traditional Gundam formula.  If you were to describe this show it would be ridiculous, but even with all of the unusual elements this show has a lot of amazing characters and epic combat scenes.  Let’s look at some of the more unusual parts of this series.

It’s not actually called that in the anime; however, when the Gundams power up to unleash their signature attacks they don a golden armor usually followed by some yelling from the pilot.  I can’t imagine any Dragonball Z fan who can watch these golden transformations and not reminiscence of the Super Saiyan Transformation.

Now if memory serves this show came out before Naruto, but at one point the main character was fighting a Gundam with the power to unleash a barrage of attacks.  The Burning Gundam then multiplied in order to block each attack individually.  Now there really is no explanation as to how the Gundam suddenly can replicate itself, nor does it happen again, but it was so much fun to watch.

The Main Character Wins By Giving Everyone The Finger 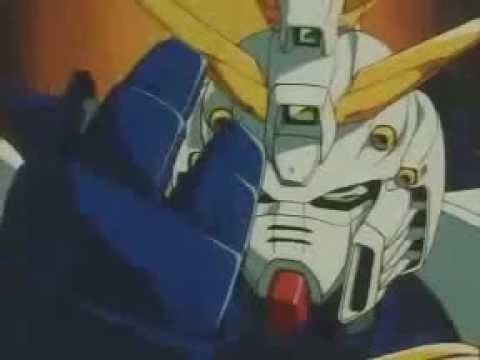 This hand of mine is burning red.  Its loud roar tells me to grasp victory.  Erupting Burning Finger!!  The main character unleashes this chant and his hand glows with a massive power that he uses to crushes the heads of the Gundams he is fighting against.  Most Gundam fans now have a fond memory of this battle chant and many have tried it at least once.

There is actually a Horse Gundam in this show that is actually piloted by a horse.  I mean that pretty much explains itself, but it was so crazy and so much fun to watch.

So those were some crazy yet wonderful aspects of Mobile Fighter G Gundam which made the series as a whole enjoyable.  What were some of your favorite wacky parts of this show?