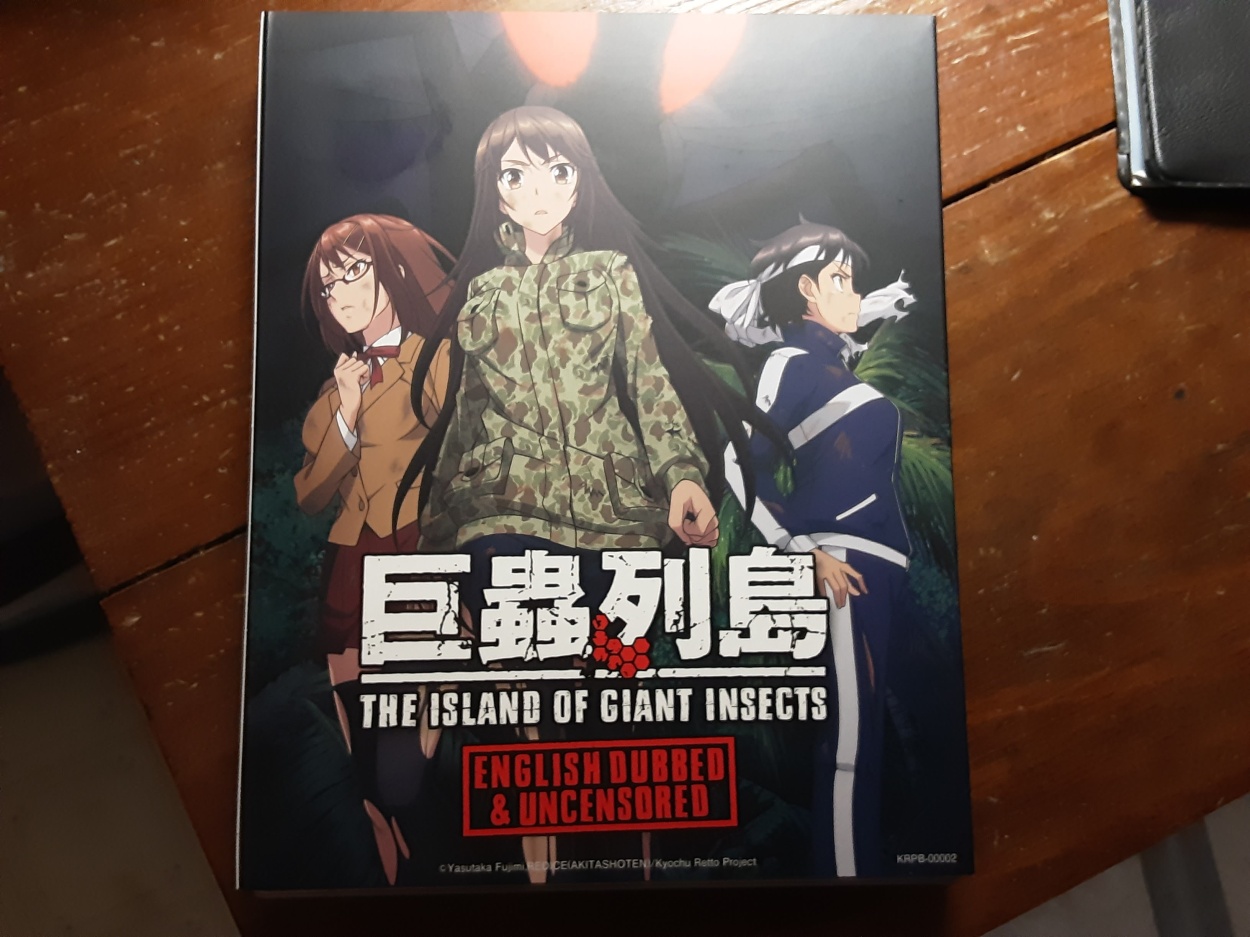 So The Island of Giant Insects is a first of its kind for me. Originally part of a Kickstarter project it’s the first and so far only anime that I’ve backed. Thankfully the project reached its goal and I was able to get a copy of the Blu-ray and even got my name in the credits which I thought was pretty cool, but we’re not here to read about me geeking out on being in the credits ha ha. The Island of Giant Insects is about a class that is going on some kind of trip; however, their plane crash lands on a mysterious island with bugs far greater than their normal size. With their increase size they become a significant threat to the class and some of them won’t make it out alive. Note: This anime does have cursing, nudity and gore so it’s not for a younger audience.

Because the show is almost immediately on the island from the get to the tension is high for nearly the entire movie. As the characters walk around the island you can feel a sense of dread as you wonder when a giant insect is going to show up and attack. Before the first attack happens you get a feel for most of the prominent characters and I disliked quite a few of them. This is not a negative though as it’s clear certain characters were made to be disliked. You get very commonly used character troupes such as the arrogant bossy guy that tries to take charge and fails miserably to the stuck-up lady that practically looks for reasons to insult another character. The actors really played their parts well and it was clear they were having fun with it which made them entertaining to watch. These characters cursed so much it would make a sailor blush as most of the lines included a myriad of foul language. This is actually one of the biggest pros to this movie as the lines got so foul and outrageous that I thought “did they really say that?” during numerous lines and was really entertained at how shocking some of the banter was. Given the language, I can’t quote the actual lines here.

The way the characters interact was also fun to watch. Many of them honestly didn’t get along well at all where as a sub set of the party managed to cooperate. This made for constant struggles for power throughout most of the movie. Even though it’s clear to the audience who should lead it’s also entertaining to watch as the party slowly arrives at that conclusion. Furthermore even after they figured it out the members of the party you’re supposed to not like keep scheming to try and gain favor to maximize their chances of survival. This adds another element to the story as you wonder when these schemes will either implode or cause turmoil for the group.

We get introduced to the main character Mutsumi Oribe who is the character with the most back story as she is a bug enthusiast who is able to use her knowledge to help the party escape harm on the island. Because she loves bugs so much she faces an inner conflict almost the entire time. She doesn’t want to harm any of the insects; however, she also knows they have to get out alive so she quickly places her love for bugs aside in order to protect the others. Through most of the movie, you really don’t get to see Oribe struggle with this fact as she’s too busy trying to keep everyone safe; however, during the few scenes that do show this conflict, it’s shown very well and makes you really feel for Oribe more than the other characters. That and the fact that she’s easily the most likable of them all.

Now I want to address the bug attacks themselves. These bugs really nail the whole creepy lurking threat vibe that you would expect from a movie like this. The party faces threats from wasps, butterflies to even ticks and most of them wind up taking out at least one person so you really get a feel for what kind of danger they pose. It was really cool to see the clever ideas Oribe used to get the party, or what’s left of them, out of danger. There weren’t many bug attacks but the movie does a great job with the long eerie waits between attacks as you really wonder at any second when an attack could happen.

I was left wondering about the ending. I’m not familiar with the series so I don’t know if there’s another part coming but it really felt like there was more the story. Not a lot was actually explained or even resolved and for a movie without a complicated story I’m honestly fine with that because the entertainment value of a movie like this comes from the suspense, which is done well; however, knowing that the ending is as open ended as it is I couldn’t help but wonder what will be next if anything is even planned for this series.

Overall this movie is meant to be a horror that really sends chills up your spine and it does a solid job of doing that. Like most horrors you’re really not faced with complicated characters or a complicated story; however, the dialogue between the characters and the terrifying feelings of suspense was well executed which is a must for a good horror. Frankly it’s 70 minutes of wondering who’s going to die next while everyone curses at each other which makes for an awesome thriller. The banter is entertaining to watch because it left me shocked at the lines they were able to say. If I have to say one negative about the movie it’s this, I don’t see a lot of reason to watch it more than once. The entertainment value of this movie comes from what is unexpected from the banter to the bug attacks themselves. Now that I’ve seen the movie I know exactly when all of them will happen so I’m not going to get those same feelings again, but I greatly enjoyed watching it.