Recently a new convention was announced called the Actors Voice Over Expo or AVOX.  This convention will take place on July 3rd, 2020 at the Pasadena Convention Center which is right in the middle of Anime Expo and not far from the venue.  While I feel like Anime Expo is a good convention when it comes to how much content the event has to offer, it does have major shortcomings with how they treat people which has been the subject of numerous complaints.  It appears AVOX is the voice actor’s response to said mistreatment and with that, I’ll go into actions done by Anime Expo that will give AVOX a huge opportunity to steal the spotlight.  Note that this is just my theory and personal opinion.

It’s no secret that industry guests do a wonderful deed for conventions where their appearance alone brings in fans far and wide.  As a result, conventions often give a significantly reduced price for an industry pass; however, in 2019 Anime Expo charged industry guests fees equal to the lowest price offered for general admission.  You can see evidence of this in a Tweet made by Sean Chiplock who can be heard in Legend of Zelda: Breath of the Wild and Persona 5.  Personally, one of my highlights from Anime Expo 2018 was meeting Sean Chiplock. Since AVOX is specifically geared towards celebrating voice over talent, I cannot imagine the actors/actresses being charged unreasonable fees to attend. I feel like this will pull talent away from Anime Expo and why AVOX will likely have more voice actors that day.  In turn, this could also sway attendees to skip part or all of Anime Expo for that day in favor of AVOX.

Additionally, the industry people are not scheduled very well.  In 2019 Anime Expo hosted a panel called Chillin With Voice Actors which would start as soon as doors opened on the conventions pre-show night.  The panel had 1000 + people who scheduled to attend this event on the convention mobile app.  The problem is due to mismanagement the doors opened as soon as the panel was supposed to start which created two problems for the event.  One is that the guests scheduled to perform at this panel were unable to get into the building in time to make the event and second the attendees were unable to get into the event in time so literally everyone involved with this panel was unable to get to the room in time.  As a result only 100 or so people of the 1000 that planned to attend this event actually made it.

The staff/security at Anime Expo in 2019 was rough at best.  At times they didn’t even know the most basic of convention policies such as who should go through the priority entrance. At their worst, they were accused of multiple incidents of mistreating others. In a tweet by Marin Miller you have a member of security accused of physical assault.  From personal experience, another member of the staff falsely accused me of going the wrong way to get to the autographing area and refused to let me say anything in response to these accusations even when all of the people around me tried to explain they saw me go through the correct entrance.   Additionally, you have a Tweet from Joe Zieja who reaffirmed the convention does not treat its actors well which indicates that there are additional concerns that go on behind the scenes.  Fans nor Actors want to be put in a situation where they fear being mistreated and it was a huge factor in my own decision to not attend this con in 2020.  AVOX is a new con so it does not have a reputation like this to hinder it. 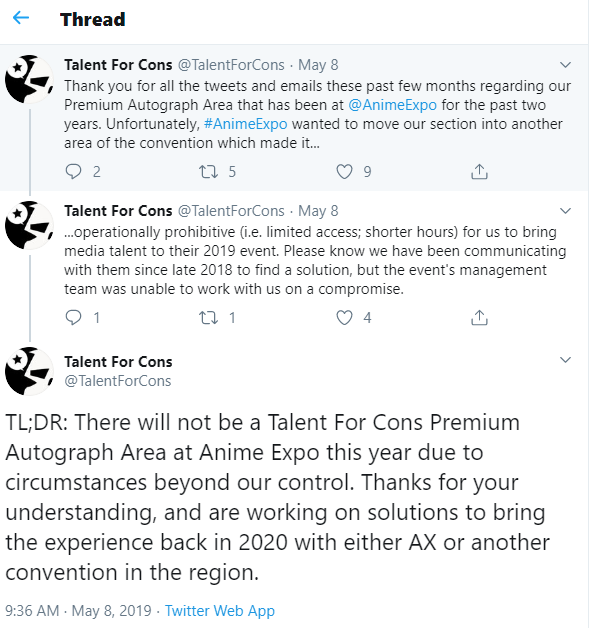 From 2017 to 2018 Anime Expo had an agreement with the booking agency Talent For Cons where over 30 actors participated in comic con style autograph sessions.  Guests would sit at a designated table for about two hours and sign autographs till time ran out.  There were no tickets required so it was an event really easy to plan for and featured a lot of amazing actors.  However, in 2019, Talent for Cons announced they would not return to Anime Expo that year because the convention wanted to move the signings to an area of the venue that would cause limited access to the guests and shorter autograph sessions.

This was a huge let down because the only alternative method to meet guests was to endure a line for autograph tickets and hope you would get a ticket for the session, but you could only get one ticket at a time so if you wanted multiple people in the same day then hope you can line up again and get another ticket.  After getting the ticket you had to then line up to get into the building and that created another problem.  In 2019 on the first day of the con, the lines were so long that some people took upwards of 6 hours just to get in.  So people who waited in line to get an autograph ticket had no way to get in the building in time to make the respective autograph session.  For guests that charge per autograph this just isn’t practical because the more people, you can get to the more money a guest can make and tickets limit the number of people you can provide signatures for not to mention the line troubles that cost a lot of guests money because people couldn’t even attend the autograph sessions. Talent for Cons will try again in 2020 but they did state they might consider another con in the area, perhaps AVOX?

Overall I know I’ve said some pretty negative things about Anime Expo but I actually don’t hate the con at all.  In fact, I had some amazing experiences at the event.  The problem is how the convention winds up treating people who are trying to make the most of this incredible expo whether it’s fans trying to meet amazing actors or the actors themselves trying to engage in autograph sessions. This creates an uncomfortable environment that I think will make AVOX very tempting for fans and guests alike in 2020.

I’m already making plans to go to AVOX this year because the Facebook page for the event says it plans to celebrate 100 of the best actors in the industry which sounds like the exact opportunity for autographs that I go to Anime Expo for.  Plus I’m just burnt out on Anime Expo after some of the negative experiences I had in 2019.  So, in short, I think AVOX will learn from the mistakes made by Anime Expo and treat its guests and its attendees well so it will pull a lot of talent that would normally go to Anime Expo during that time of year which will have a significant impact on the Expo as a whole.  What I’m hoping will happen is Anime Expo will improve on how people are treated and we actually wind up with two amazing events during the same time of the year.