So this will be the first of multiple entries regarding my experiences at Anime Expo 2019. Chillin With Voice Actors was a panel that took place on the pre-show night of the convention which features multiple voice actors for a Q and A session led by moderator and voice actor Jeff Burns.  After the Q and A session, Jeff will assign the voice actors a part in a script to perform live in front of the attendees.  Because this panel has more elements working together to entertain an audience in comparison to most panels I attend, I picked this as the first thing to write about for Anime Expo. 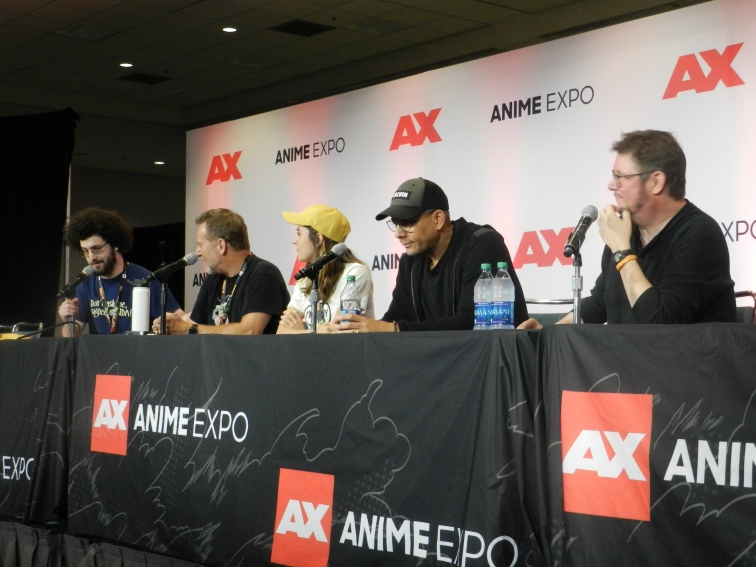 Starting off with the Q and A session, Jeff will ask a few questions to get an insight to the voice acting careers of panelists. In most Q and A events, you wind up hearing the same questions over and over again, which is why I don’t attend that many Q and As; however, Jeff asked questions such as “can you describe a voice acting session from hell,” or “what is a role you’ve done that most people are unaware of?”  Questions like these are not often asked in your standard panel and these created spectacular answers that I could go on and on about. It was very clear that Jeff is familiar with what goes on in a typical Q and A and designed questions to deviate from the norm to create unique answers.

When the panel shifted to the script reading, Jeff assigned a script from the show Flash Gordon and assigned roles to each voice actor.  In addition to assigning roles, for some actors, Jeff would also assign a task.  For example, Mona Marshall had to add a different affliction to her voice for each segment of dialogue. Another smart move that required knowledge of the experiences of the performers chosen for this panel. The actual reading of the script was hilarious and spectacular.  Every time Mona Marshall changed the way she spoke it was an incredible experience and all of the performers read the script so well it was hard to believe that this was their first time seeing it, but that does show the talent of these amazing individuals.

Overall the panel was a very entertaining experience.  You’ve got a unique variation of a Q and A panel followed by a script reading that really shows off the talents of all of the voice performers involved.  The only real problem with this panel was the scheduling on behalf of Anime Expo.  The expo placed this event at 6pm on the pre-show night, so it was one of the very first panels of the convention. Due to delays of the con, the attendees were not allowed to enter till after the panel started.  I was the first premiere pass holder allowed in the building and I was still late for the panel.  It got to the point where one of the voice performers was actually held up in line to get into the building.  On the Anime Expo app, over 600 people had this event in their schedules, but approximately 100 showed up and I think the scheduling issues were a huge factor in this. Anime Expo needs to see that this is a very enjoyable part of their convention and if they are not going to be organized enough to open the doors in time for people to see this event then they need to place this panel in a time slot where it can shine.  I say move it from the pre-show night and place it sometime within the other four days so that these problems do not continue to plague this panel.

If you ever get a chance to attend this panel, do it.  You’ll be incredibly entertained from start to finish.

One thought on “Chillin With Voice Actors 2019 Anime Expo Review”