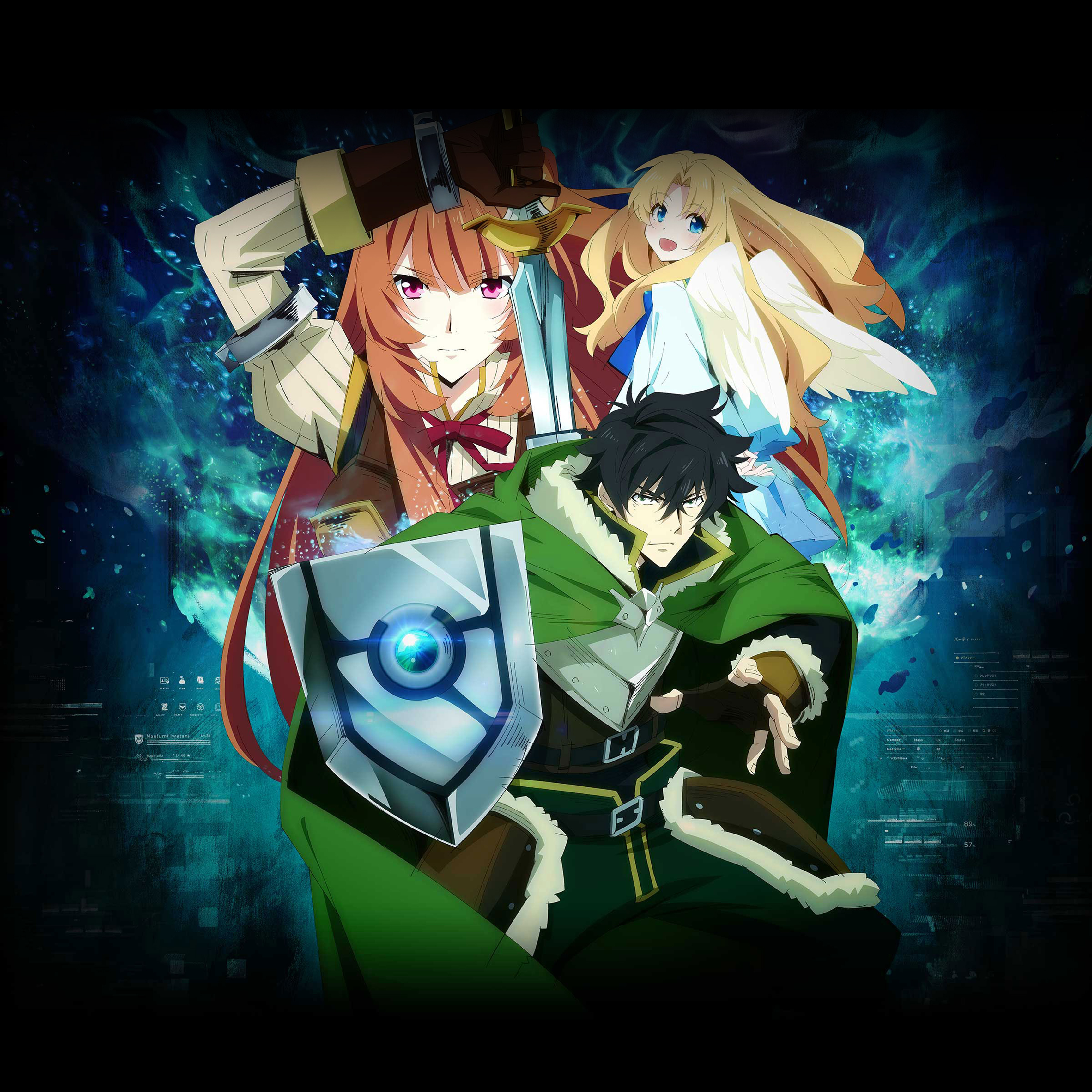 I didn’t know much of anything about this show going into it except that a lot of people loved it and everyone hated a red-haired lady in the show.  Rising of the Shield Hero is about a man named Naofumi Iwatani who became one of four heroes summoned to a new land, that functions very much like a video game, to protect it from waves of monsters that spawn with the intent of destroying everything in sight. The heroes wield one of four cardinal weapons, a sword, spear, bow, and shield, and Naofumi was chosen to wield the shield and become the shield hero.  He was excited about the adventure but then gets framed for a horrible crime he did not commit and now he has to deal with the waves attacking a kingdom that utterly hates him and the feeling is mutual.

I was really amazed by how dark the story is.  The crime Naofumi was accused of was absolutely horrible and everyone treats him terribly because of it.  As a result, Naofumi develops an intense hatred for the world he’s in.  Due to welding only a shield he is in need of help to develop a party to combat the waves, but his reputation prevents anyone from wanting to be with him so he purchases a slave to be his sword and they slowly develop a really strong bond with each other.  The story continues with him and his party wandering around and getting stronger while helping others along the way.  What I love is how it clearly shows two distinct versions of Naofumi, the hopeful happy version before he was accused of his crime and then the spiteful loner that was created from his hatred of everyone’s wrongful persecution of him.

The story isn’t complex because it’s all about the heroes getting stronger to defend the land while Naofumi deals with his fallen reputation, but the characters are very detailed and they all have amazing backstories that make for a wonderful viewing experience. Even if you hate a character, and you will, you most certainly will, you still enjoy everyone’s incredible contribution to the plot.  What makes the season great overall is the focus on character development as Naofumi experiences and addresses incredible trauma which has had a very serious impact on who he is as a person.  The supporting cast is amazing too as you have a wide range of characters where most of the ones who appear regularly are very well developed and are interesting to watch.  Even the side characters come with very interesting back stories and are well fleshed out to where you feel the importance of each person that garners a lot of attention.

The story doesn’t go into that many details about the antagonist but that’s fine because they were kind of a secondary concern for this season.  We instead see more of how Naofumi winds up reluctantly helping so many people because while he hates his situation he still is compassionate at heart.  It also helps show how Naofumi is a more intelligent warrior when you see how most of his actions are done to fix the consequences of the actions of the other three heroes who thought they were saving the day and had little regard for the aftermath of their decisions. You see the development of two polar opposite reputations for Naofumi, the man convicted of a horrible crime versus a savior that protects the people.  You start to see people really start to put pieces of information together as they notice the huge contrast between the initial accusation versus Naofumi’s actions throughout the entire season. As for the fight scenes they are an enjoyable situation of irony.  The other three heroes who aided in the persecution of the shield hero are much stronger level-wise due to their abundance of resources and have to rely heavily on the shield hero to combat the waves to the point that the enemy sees the shield hero as their only real threat.  I love seeing how Naofumi hates the fact that he plays such an important role in saving these people, but also subtly enjoys being the superior warrior.  The show has quite a variety of conflicts from physical ones such as the waves, emotional ones and you have some more light hearted conflicts such as a race between the Shield and the Spear Hero.  The use of combat in this show really makes for a great tool to help portray a wide variety situations and alternate between intense and light hearted moments for a well balanced season.

Another thing I really enjoyed was watching the powers that Naofumi develops and how they reflect the anger in his heart over his situation.  His hatred fuels a new power for his shield that if he’s not careful will consume him; however, when used it created some of the most memorable scenes of the entire season and the power and animation behind using the shield is a spectacle to behold.  He used this one technique called the Iron Maiden where his voice gets almost a demonic touch to it as he calls forth this incredible power.  Billy Kametz really knocks it out of the park with Naofumi as you get chills listening to how he deals with quelling the rage and hatred in his heart while also finding a way of using that hate as a source of power.

Overall there are a lot of shows out there that feature heroes fighting in lands with video game-like rules; however, I feel Rising of the Shield Hero really stands out among them as a must-watch.  The characterization is really deep and I commend this anime for making such incredibly wonderful stories for each one of them.  So many of them had to overcome tragedy that you can clearly see shaped their personalities and their motives whereas so many shows fall short in comparison.  Watching these characters, especially Naofumi, deal with struggle, deal with pain and deal with obstacles is what makes this show so amazing and then seeing these characters turn all of that and use it as a source of power is just incredible to watch. The character development is just top notch and the combat is fun to watch.  This show hits all the elements of excellent storytelling.  I just loved this show and before I knew it I watched the first 10 episodes.  I had to see what happened next and wound up finishing all 25 episodes of season one in just a couple of days.  I can see why this show was renewed for a second and third season so quickly because the characters in the show make you want to see what happens next.

2 thoughts on “Rising of The Shield Hero Season 1 Review”